I often marvel at how ordinary people face their fears on reality TV shows. Last night, while waiting for the season return of Googlebox, I caught the end of one such show. Two female celebrities were placed in an underground tank which was then filled with water… and live snakes. It’s the stuff of nightmares.

I’m not overly fond of spiders. I’m not debilitated by them but I dislike the way they move stealthily until they are satisfied they’ve found a prime spot guaranteed to maximise the decibels of my scream.

So I was intrigued to learn of a possible cure for my mini-phobia. The BBC reports on research in the US where arachnophobes were exposed to a slideshow of a series of flowers, amongst which photos of spiders flashed up quickly. The research shows the person physically responding to the image of the spider, the mind lighting up like a Christmas tree as it tried to control the fear response. Yet the person was not conscious of having seen the spider. The exposure was too short. The researchers suggest this technique could be refined as a technique to cure for phobias amongst adults and children.

What does this have to do with marketing you ask?

The technique being trialled reminds me of subliminal marketing in advertising. The premise is this: if you slip subliminal messages in your advertising, you can influence conscious buying behaviour through the subconscious mind.

Subliminal marketing has been the subject of many studies because consumers are concerned about what feels like a type of deception. It is illegal in places, including certain instances in Australia (eg television programs and community service announcements). But does it work? There’s no clear evidence yet that subliminal messaging in advertising can affect future buying behaviour. And as future buying is what advertising is aiming to influence, it seems to me there are more reliable ways to make an impact.

I don’t understand the need for subterfuge. Why would you want to hide your brand in your advertising and leave it to the off-chance someone will subconsciously act on it?

How NOT to accidentally let your competitor photobomb your advertising

Your aim should be to leave people in no doubt about what is being advertised and that it is coming from you.

Good branding is essential, particularly for smaller brands. There’s evidence that people who see a poorly branded advert may later incorrectly attribute it to the first brand they think of – often a bigger competitor in the category. (Great reading on advertising, likeability and recall in this scientific study). You’ve probably done it yourself. Have you ever seen an advert and all you can really remember is that it was funny, and it was for beer but you had no idea which brand it was? The advertiser has simply wasted its money.

Don’t leave gaps for your competition to creep into your campaign. Instead, make sure your campaign uses distinctive brand assets that the market can only associate with you.

I first learned how to measure distinctive brand assets from the Ehrenberg-Bass Institute of Marketing Science during my Graduate Diploma of Marketing at UniSA. Leveraging these assets doesn’t mean plonking your logo in the corner of your TV commercial for its duration. It’s about weaving into the creative, more subtle but still recognisable elements. The McDonalds ‘whistle’, Toyota ‘jump’ and Mortein’s ‘Louie the Fly’ (almost disastrously killed off) are good examples. In the case of TV, radio or video content, the trick is to also distribute these throughout the ad. Leaving them for the last 3 seconds is pretty unhelpful to people who skip past your youtube pre-roll.

So back to the arachnopohobes. It will be interesting to see if attempts to influence conscious behaviour through the subconscious mind, proves more effective in changing behaviour in phobias than in advertising. I guess the real test – as always – is what people actually do in real life. Until then, what is known is that spiders almost certainly can be found hiding in the strangest of places.

"Tania respectfully moved us beyond our conventional approaches. Today our business is thriving again and our digital presence and content strategy has emerged to become a business strength."
Daryl Bateman
CEO, COTA Insurance

Tania Cavaiuolo is a Certified Practising Marketer and experienced communications practitioner with more than 15 years of experience across the for-profit, for-purpose and government sectors. 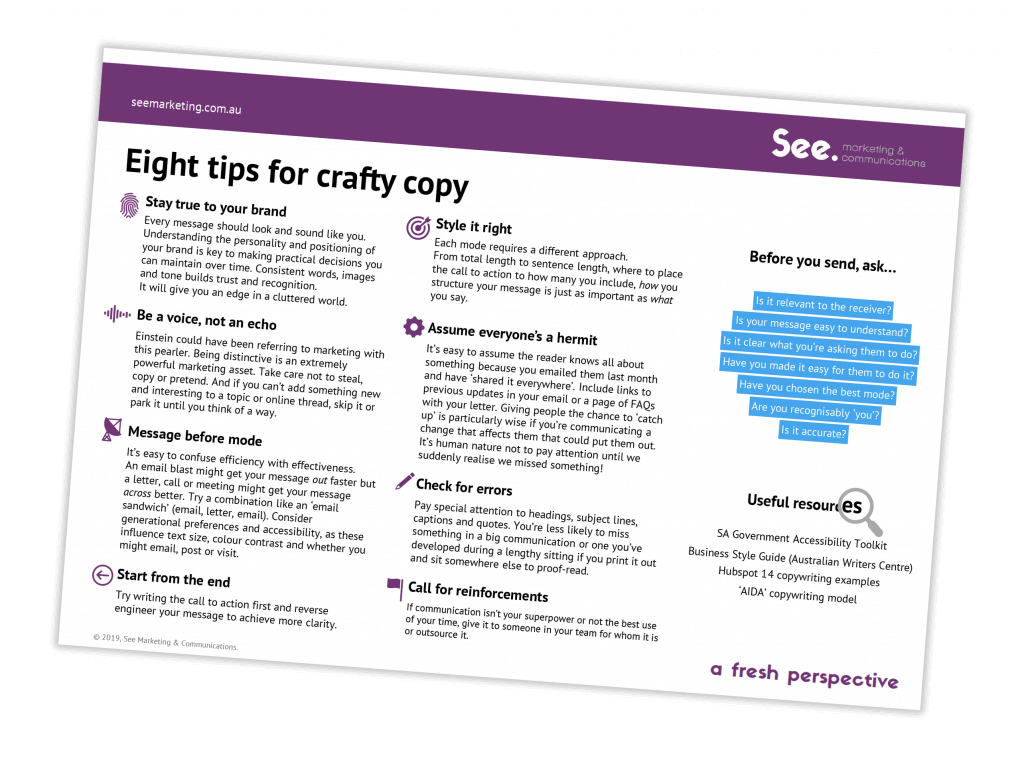 Download our free checklist to help you craft more impactful communications in your business.

We acknowledge the Kaurna people as the traditional custodians of the land where our business is located. We respect their cultural heritage, beliefs and deep relationship with the earth, sea, waterways and sky. Niina Marni means ‘hello’. Marni’ai means ‘I am well’.

Please fill in your preferences and we’ll be in touch. It’s probably easiest to suggest a few mornings or afternoons to get the ball rolling.